As only New Yorkers know, if you can get through the twilight, you’ll live through the night. (Dorothy Parker)

PyGotham 2018 was my first PyGotham conference and my third conference of the year. I first heard about PyGotham when Jon Banafato and Dan Crosta, two of the organizers, invited me to submit proposals when we met at the PyCon 2018 Instagram dinner. I enjoyed the conference very much, but my experience was much different than the previous two conferences.

A Tourist Day in New York

PyGotham is hosted in New York City. I booked my flight a day before the conference started to make sure that I’d be on time. My wife also came along for the trip. That meant Thursday, October 4 was a tourist day! Our flight arrived in EWR at about 10:30am. We took a commuter train to Penn Station in Manhattan and walked a block to our hotel, Hotel Pennsylvania. Unfortunately, we couldn’t check into our room until 3pm, so we dropped our bags (for $15) and went along our way.

Our first stop was lunch at Xi’an Famous Foods. XFF is a fast casual restaurant chain for authentic Chinese food local to NYC. We ordered two noodle dishes (one liangpi “cold skin” noodles and the other the wide hand-pulled “biang biang” noodles), a pulled pork “burger,” and hawberry tea. Our meal was absolutely delicious.

We spent our afternoon at the National September 11 Memorial & Museum. I was just starting 8th grade when the terrorist attacks happened, but I remembered all the details clearly. The outdoor memorial – a sunken fountain for each tower’s square base – showed both emptiness and resolve. The museum was built into the underground foundations for the towers, essentially as a cave. The starkness of the concrete, the use of light and shadow, and the pacing of exhibits all highlighted the tragedy of 9/11/2001. Every American should visit the site if they are able. 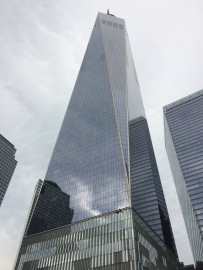 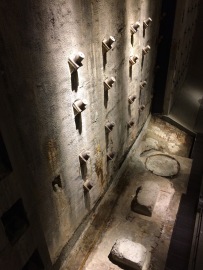 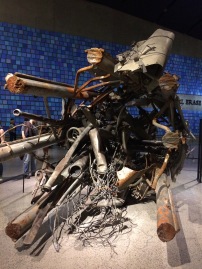 Part of the antenna

We checked into our hotel before dinner that evening. And then we learned why Hotel Pennsylvania has only 2.7 stars on Google: it’s nasty. The hotel is 99 years old and looks like it. The carpets are filthy, the lights are dim, and most of the building smells damp. I chose to stay there because the conference was held there, but I don’t think I will be returning.

One plus side of Hotel PA is that it is right next to Koreatown. My wife and I ate dinner at Five Senses, a trendy Korean restaurant with a line nearly out the door. We then walked around a bit to see the hustle and bustle: we tried Gong Cha bubble tea, got breakfast for the next morning at H-Mart, and bought some face masks at Kosette Beauty Market. A Korean friend of ours was jealous! 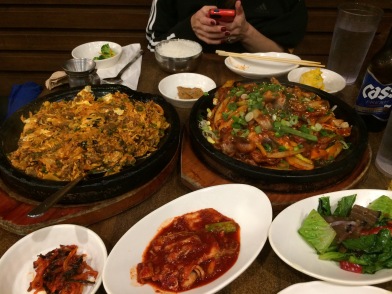 Dinner at the Five Senses 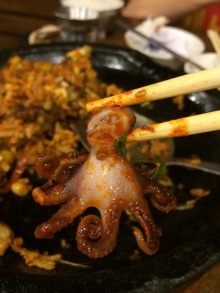 The conference itself lasted two days: Friday, October 5 and Saturday, October 6. About 600 people attended over the two days. By this time, I was well acquainted with Python conference formats. Each day opened with a keynote, followed by several talks in a few rooms with breaks in between. I reconnected with old friends like Trey Hunner and Gabriel Boorse and also made a few new ones. 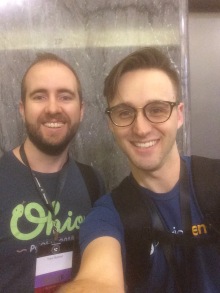 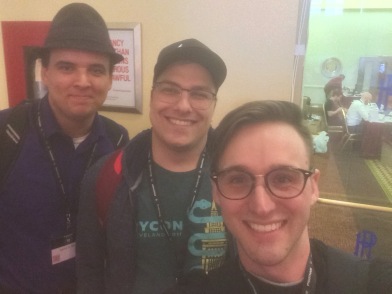 Gabriel (middle), his friend (left), and me (right)

The opening keynote was “Software Freedom and Ethical Technology” by Karen M. Sandler. Karen explained why free, open source software is foundational for the ethical use and development of technology. She used the example of her Implantable Cardioverter Defibrillator (ICD). Nearly all modern ICDs have wireless connectivity, which renders them vulnerable to hacking. Since the source code in this device and so many others in the Internet of things is closed, individuals are unable to make changes for customization or protection. Karen’s talk was definitely thought-provoking.

My favorite talk, by far, was Trey Hunner’s “Python Oddities Explained”. Trey dove deep into the way variables, data structures, and scope work in Python 3. This talk was particularly helpful for me because I work in several languages and sometimes assume how small details work.

My talk, “Egad! How Do We Start Writing (Better) Tests?“, explained how to build a functional test automation solution in Python from the ground up. It is the same talk I delivered at PyOhio 2018, though I hope it turned out better the second time!

Attendance was pretty good, too.

Conference room panorama for my talk

Video recordings for all talks can be found on the PyGotham 2018 YouTube channel.

PyGotham had a stronger business vibe than the other Python conferences I attended. Many attendees came as part of company groups. (I heard rumors that about a hundred came from Bloomberg.) Speakers more openly talked about their companies and specific projects. This all made sense considering the location being NYC.

A number of vendors also had tables with goodies to give away. Bank of America, Buzzfeed, Venmo, Linode, Clover, and Django Girls all showed up, along with others I cannot remember off the top of my head. I netted two t-shirts (in addition to two PyGotham t-shirts), a notebook, some silly putty from Linode, and a handful of stickers. 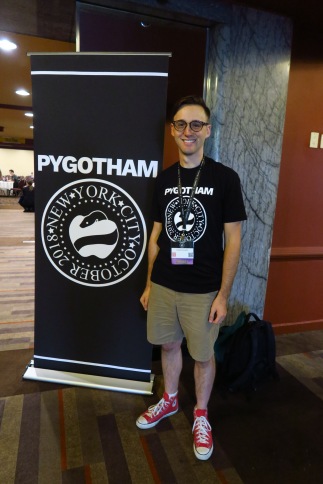 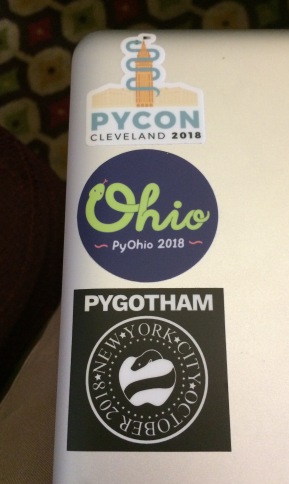 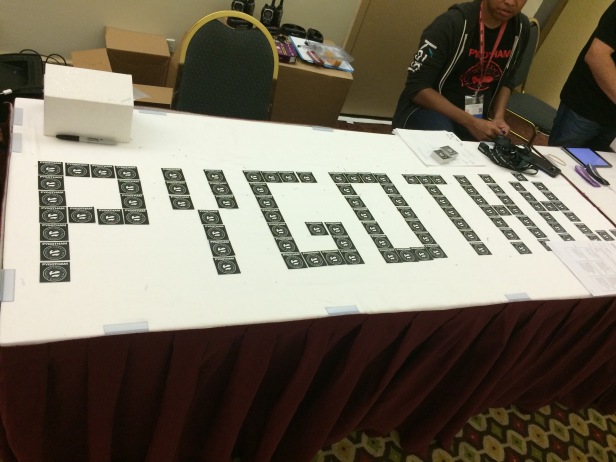 On Friday night after the conference, my wife and I took the Subway to Brooklyn and walked the Brooklyn Bridge back to Manhattan. The view of the city skyline was spectacular. We then hopped the Subway up to the Upper West Side for drinks with my friend Evan. On the way back to the hotel, we stopped at a dim sum restaurant for a late night dinner.

We didn’t have time to explore New York on Saturday night because we had an overnight flight to catch: we were going to London, England for the week after the conference! We checked out of the hotel, caught the Long Island Rail Road to JFK, and then flew Norwegian Air across the pond. 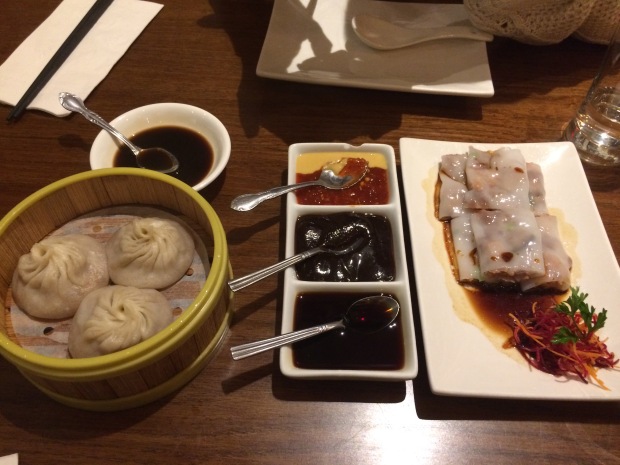 During PyGotham 2018, I spent a lot of time pondering software testing and automation. I like to use conferences as my time to disconnect from immediacy and think big thoughts.

One thought I formed was the nuance between testing and change detection. A friend of Gabriel’s posed an idea for REST API service testing. Rather than write a bunch of test cases that check responses, why not simply gather responses and diff them against previous responses? Request automation would still be needed, but response assertions could basically be skipped. Any changes would be identified and reported. This approach struck me as novel and useful but not comprehensive. Change detection will reveal when a code change results in a feature change, but it lacks the moral calculus of true testing because it cannot determine if the change is good or bad. It must yield the judgment to a higher authority, like a developer, a tester, or even an AI agent (which arguably further begs the question of goodness). Nevertheless, I think change detection can be very useful in conjunction with testing, either as a tool to assist manual testing or as an extension to an automation framework.

Another thought I had was to notice the widening gap between companies over testing maturity. Some companies are on the bleeding edge with the latest technologies, tools, and frameworks. They have multi-stage pipelines with countless automated tests and several daily deployments. Other companies are stuck in the past, still suffering through “Agile transformations” and failing tests. There are now several vendors pitching advanced testing solutions, like Sauce Labs for cross-browser testing and Applitools for visual testing. I wonder how many of these vendors are too far ahead for companies with less mature testing to catch up.

For the first time at a conference, I felt serious self doubt. Am I behind the times as a Software Engineer in Test? Is my method of software testing already antiquated? Am I truly a developer, or do I just pretend? Is there a future for the SET role? Will my ideas add value to the field? Will I have time to pursue all of my professional and technical desires? Am I good enough to be here at PyGotham? I felt a bit lonely and withdrawn. My malaise did not sour my conference experience, but it did come unexpectedly. Nevertheless, I must use it as impetus to become a better me.

I’m thankful for the opportunity I had to speak at PyGotham 2018. I thank the conference organizers for accepting my talk proposal, as well as PrecisionLender for sponsoring my travel costs. I’d love to return for PyGotham 2019 if possible!